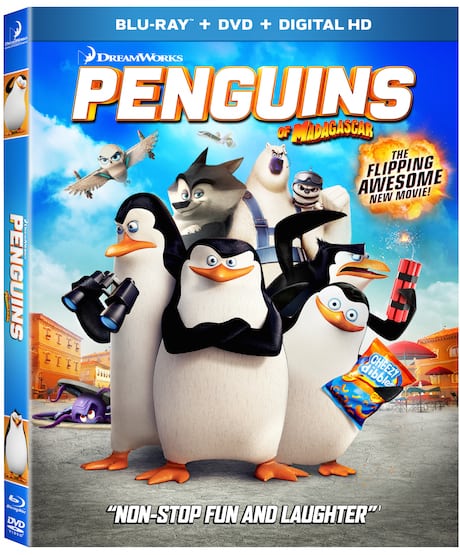 We absolutely LOVED Penguins of Madagascar in the theater, so we’re super excited that it is almost time for it to arrive on DVD and Blu-ray on March 17th. If you haven’t yet seen the movie, Little R has his own review that he filmed when we left the theater:

Is that enough to convince you to see it? I have to throw in that it’s a lot of fun for grown-ups too. Those penguins are so darn cute and REALLY FUNNY too! As an added incentive, for a limited time, get 2 hopping Penguin toys only with the DreamWorks’PENGUINS OF MADAGASCAR Easter DVD and Blu-ray™ pack on March 17 making it the perfect gift for Easter baskets.

PENGUINS OF MADAGASCAR is “a fun, smartly conceived film that will appeal to all movie-goers,” proclaims Bill Bregoli of CBS Radio. A hit with audiences and critics alike, the film received an outstanding audience reaction with a coveted “A-” CinemaScore® and certified fresh on RottenTomatoes.com.

Directed by Eric Darnell and Simon J. Smith, PENGUINS OF MADAGASCARfeatures the voice talents of John Malkovich (“Crossbones” Red 2), Benedict Cumberbatch (The Imitation Game), and Ken Jeong (The Hangover), joining Tom McGrath, Chris Miller and Christopher Knights, who are reprising their roles as the Penguins from the beloved Madagascar franchise.

The Blu-ray™ and DVD feature hours of bonus materials that uncover the covert operations of the PENGUINS OF MADAGASCAR including several exclusive featurettes, a deleted scene, a music video by Pitbull, a dance tutorial by tWitch, and more. 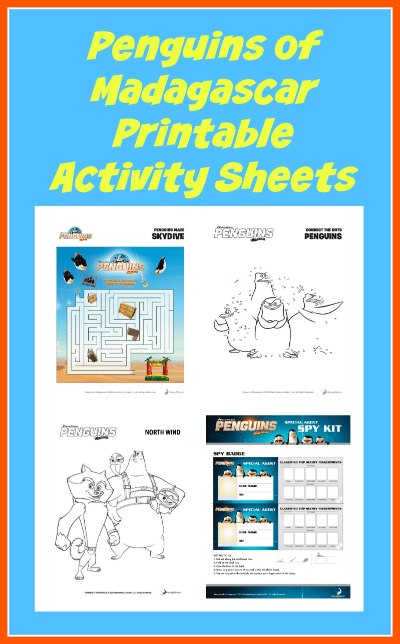 For some extra penguins fun at home, we have these Penguins of Madagascar Printable Activity Sheets:

Reader Giveaway: One lucky Jinxy Kids reader will win their own copy of Penguins of Madagascar . To enter, just complete the entry form below by 11:59pm ET on 3/12/15. Good luck!