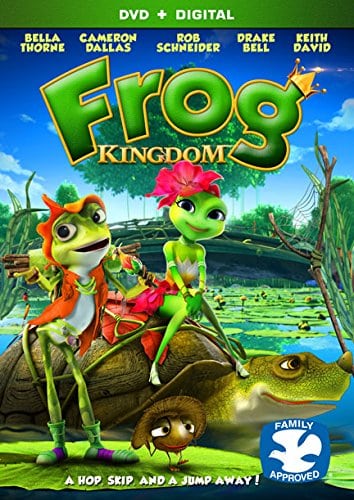 A not-so-royal Frog Princess saves the day in the new movie Frog Kingdom, arriving on DVD, Digital HD, and On Demand on June 30th.  This film features voices from highly praised actors such as Bella Thorne, Drake Bell, Rob Schneider, and more depicting a story of a frog princess who doesn’t consider herself so royal and ends up a hero.

Take the journey of a lifetime when Frog Kingdom arrives on DVD (plus Digital HD), Digital HD and On Demand June 30 from Lionsgate Home Entertainment. The DOVE Family Approved film is “funny and filled with action” (DOVE Foundation) and features the voice talents of teen-favorites including Bella Thorne, Cameron Dallas, Drake Bell and Gregg Sulkin. Frog Kingdom, containing a behind-the-scenes look at how the characters are brought to life in the recording studio plus Minusculeaward-winning shorts, arrives on DVD for the suggested retail price of $19.98.

When The Frog King (Keith David) announces that the winner of the Froglympics will win his daughter’s hand in marriage, Princess Froglegs (Bella Thorne) runs away instead.  Disguised as a commoner, the Princess befriends street vendor, Freddie (Cameron Dallas), and begins training with him for the games—determined that she will win and thwart her father’s plans of marriage.  Meanwhile, the villainous serpent has ideas of his own to ruin the Froglympics and take over the kingdom.  With a little luck, and a little help from their trusty sidekick Captain One-Eye (Rob Schneider), Freddie and Princess Froglegs set out to save Frog Kingdom from the evil serpent.

Reader Giveaway: Two lucky Jinxy Kids readers will each receive their own copy of Frog Kingdom.  To enter, just complete the entry form below by 11:59pm ET on 7/6/15. Good luck!